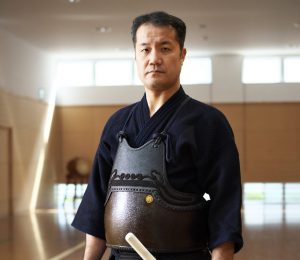 The 4th All Japan Invitational Kendo 7th Dan Championship Whether it was "after all" or "finally", Teramoto Shoji, an officer of the Osaka prefecture police, was victorious at the Yokohama 7th Dan Tournament which was held for the fourth time. The past three competitions he was caught up in an idea fix that "7th Dan should be a certain way". Teramoto who persisted in his faith and came out of his shell was so strong he made it look normal. We shall listen about Teramoto’s present, who built an era in the Kendo world in his active career days. Profile Teramoto Shoji Born in Kumamoto prefecture in 1975. Started Kendo at the Shiratsubo Kendo Aiiku Kai, and advanced to Karyo Junior high, Kumamoto University of Technology high school and International Budo university. Although he was not blessed with big titles during his student days, his talent bloomed at the Osaka Prefectural Police where he advanced after college graduation. He played as the center player of the team and was elected to the Japan national team of the World Kendo Championships. In the 55th All-Japan Championships tournament he became the best of Japan, and in the 14th World Championships tournament held…

"”When I faced off Takenaka Kentaro sensei at the first match of the pool phase, I felt that the baggage fell off smoothly.

A great article. It provides so much to consider.