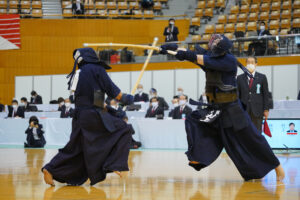 2021.7 KENDOJIDAI The 68th All Japan Championships were held in an unusual way. The finalists were Kenshiro Matsuzaki, who finished second in the previous tournament, and Raita Murakami, who was making his second appearance in this tournament. “It gave me confidence that I can still compete" he said. The man who has been touted as a great talent since he was a young man finally reached his big moment after many years of hard work. We wonder what was going through Murakami's mind. Murakami Raita, 5th Dan Born in Hokkaido in 1989, 31 years old. He began his kendo training at the Date Ajiro Dojo, and after studying at Toin Gakuen High School, Tsukuba University, and the graduate school of Tsukuba University, he became an assistant professor at Osaka University of Health and Sport Sciences. As a student, he placed 3rd individually in the National Junior High School Kendo Tournament, 3rd individually in the Inter-High School Kendo Tournament, and 1st in the All Japan High School Kendo Championship Tournament (team). After becoming a teacher, he won the team championship and individual second place at the National Teachers' Championship, and third place at the All-Japan Inter-Prefectural Championship. He is currently a candidate…