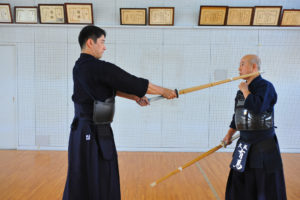 Suburi that does not anticipate competition is mere physical exercise. Suburi with a real situation in mind is the ultimate 1 person keiko. This is where suburi for exercise and suburi for real situations differ. The secret of being strong lies in suburi Get crisp technique with this suburi In order to survive the harsh world of the tokuren (special police training squad) Arima Mitsuo, a veteran police officer, had made suburi a daily routine. He introduces the suburi he has put into practice with emphasis on the importance to strike in one movement. Arima Mitsuo, born 1943 in Okayama prefecture, 74 years old. From Saidaiji High School to Osaka prefectural police officer. Became 2nd and 3rd in All Japan Championship Tournament 3 times. Won National Police Team Championship 9 times and Individual victory 1 time. Meiji Village Kendo Championship 2 times, participated in All Japan East West Tournament. Currently, Osaka Prefecture Police Kendo Honorary Teacher and Toll Express Co. Instructor. Hanshi 8th dan. Anyone who has done kendo has done suburi, and I think everybody recognises the importance of it. Suburi can be done in spare time and without opponent, but in reality, isn’t it quite hard to actually…