Kendo tournament that has been held yearly for more than a quarter of a century. The organizers' wishes and reasons why children continue practicing kendo 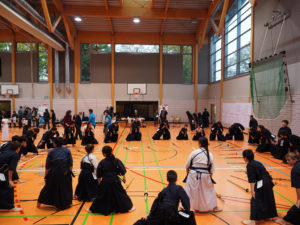 On November 9th, 2019 (Sat) The 27th Dusseldorf Cup was held in Dusseldorf, Germany. This time, 100 people from 4 countries and 15 dojos participated. Boys and girls aged 6 to 18 had a clash of technique and skill. How was this tournament held for the 27th time this year, and with what mindset did children participate? In this article, We will introduce interviews with organizers on the key points of this tournament which has been running for over a quarter of a century. We hope it will be helpful for those who run kendo tournaments all over the world. Points to manage the tournament & difficulties First of all, I asked Mr. Hashimoto, the director of JCD e.V. Kendo Club, about the points that are considered in managing the tournament and the difficulties that may arise. ● How has the three-country tournament come into being 27 years ago? “This tournament began in 1993 between the Dusseldorf Shonen Kendo Club (the club name at that time), the Kojika Dojo in Belgium Ghent, and Renshinjuku in Amstelveen, the Netherlands. The three-country tournaments were held three times a year in February in the Netherlands, May in Belgium, and November in Germany. Unfortunately,…