Balance between the physical and the mind, and go all-in at an opportunity 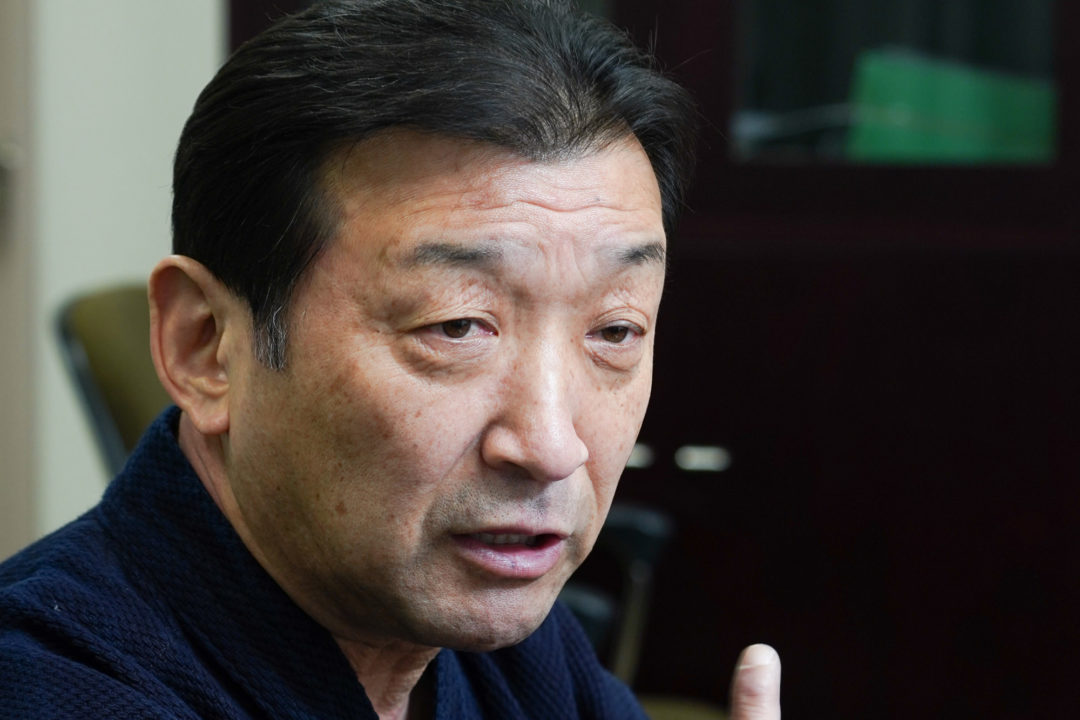 “There is the physical center and the center of the mind”, says Hanshi Matsuda Isato. Controlling the two, and attaining an Ippon with an all-in technique, is what Kendo is all about. Matsuda, who is known for undisrupted Seme, talks about the importance of taking the center and the process from there to striking.

Centering the heart in shape

When we talk about controlling the center, we tend to have an image that you set the Kensaki on the opponent’s center line, but in fact, it is not only that. There are two types of centers, namely the physical center and the center of the mind, and I think it is important to control both of them.

I would like to talk about controlling the center of the mind first. Miyamoto Musashi taught in The Book of Five Rings about the “Kamae of no Kamae”, and I think this is exactly what it means to conquer the center of the mind. There is a well known portrait of Miyamoto Musashi, where is standing with two swords down. Does he look like he has an opening to strike? It seems to me that there is no opening whatsoever.

If we translate this to Kendo, we can call it Kigurai (dignified intent) or Kigamae (Kamae of the spirit). In Kendo, even if you aren’t able to take the physical center, I believe we should aim to take the center of the mind.

When I was a high school student at Seifu High School, I had many opportunities to practice with Kobayashi Mitsuru Sensei, an Osaka police officer (Hanshi 8th Dan). He often applied Seme to me while opening his Kensaki during Keiko. If a beginner would watch this from the sidelines, they would wonder why I wouldn’t  just go ahead and strike. However, I couldn’t feel any opening whatsoever to strike him. When I tried to strike, the open Kensaki came back to me in a flash. Truly, the center of my heart was controlled.

When I was at Kokushikan University, I had a similar experience, albeit in a different form. It was during Keiko with Yano Hiroshi Sensei (Hanshi 8th Dan). When I took Kamae with Yano Sensei, the pressure from his Kensaki was so great that I didn’t feel like I could strike at all. Even though there were moments when I took the physical center, for some reason I was not able to strike. In fact, Yano Sensei had taken the center of the mind and controlled me. When you hear the phrase “taking the center of the mind”, it sounds incomprehensible, but what both teachers had in common was that their left hand remained still in every situation. It is said that the left hand represents the mind. The movement of the left hand is proof that your spirit has moved.

I still recall the time when I asked Nishi Yoshinobu Sensei (Hanshi 9th Dan) for Keiko. No matter how much I did Seme towards him, Nishi Sensei’s left hand did not move. When I couldn’t do anything about it and still applied Seme, Nishi Sensei was not disrupted of course, so he could just perform Tsuki to stop me. I was keenly aware of the immaturity of my own offense, and I also realized the strength of Nishi Sensei’s courage and heart.

Moving on to the second type, to control the center physically is to take the center of the opponent with one’s own Kensaki , as in the basic teachings of Kendo. There is a teaching called “Sansappo”, which means to kill the sword, kill the technique and kill the mind.

I think the first step in this process, killing the sword, is to control the center physically. To take the center with the Kensaki, there are various ways to do Seme such as from the left or right, above or below and many more. What is important in all of them is to kill the opponent’s Shinai, or more simply, to stop the momentum of the opponent’s Seme.

Usually when you control the opponent’s center, his Kensaki is off center. In this situation, if he strikes you, it is easy to kill his technique or to strike him. If you can always maintain this state, you will be able to keep your offense and defense intact. When practising this kind of Seme, it is important not to move the left hand while you control the center of the mind. If the left hand moves up, you cannot control the opponent’s center with the Kensaki. As is said since old times, “Move the Shinai within the range of a small square”. The left hand is contained, and you can kill the opponent’s sword with a movement of about the width of the Shinai. By doing so, you can disrupt the opponent without getting disrupted yourself and create an opportunity to strike.

Shake off the doubt and hesitation. Be resolved to go all-in

Assuming that you control your opponent’s center, it’s not so easy to connect with your strikes right away. What is important here is the feeling of going all-in. I am still in the process of learning this and may not be achieved until I die.

The more I practice Kendo, the more I feel the chaos that occurs at the opportune moment of striking. When this feeling of “wanting to strike, not wanting to get struck” occurs, it is impossible to perform an all-in technique. Occasionally, some people come out to strike without Seme, but they are not not going all-in, they are just being reckless. Controlling the center and then going all-in is the main point of Kendo, and this is the most important challenge for me.

As the teachings goes “don’t strike and win, win and strike”, the process of applying Seme and striking is very important in Kendo. If you can do this, striking becomes the end result. It is common that in the process of training, strikes with a half-hearted attitude or doubt occur. These thoughts of hesitation should be gradually chipped away in regular Keiko. This is the training process of Kendo. Broadly speaking, it can be described as “determination”. Without this resolve, I believe it is meaningless to study Kendo, and I would like to cultivate the mentality to create this resolve in my Keiko.

Kendo is a game with an opponent. Kendo rarely goes the way we want it to, and the opponent also has the desire to strike or not to be struck. If we can get synchronized with the spirit of our opponent during exchanges and take the center, I think the opponent will naturally get disrupted. That’s the opportunity for striking, and all you have to do is deliver an all-in strike. If you catch your opponent with this technique, it will be a fulfilling Ippon that will resonate with any observer.