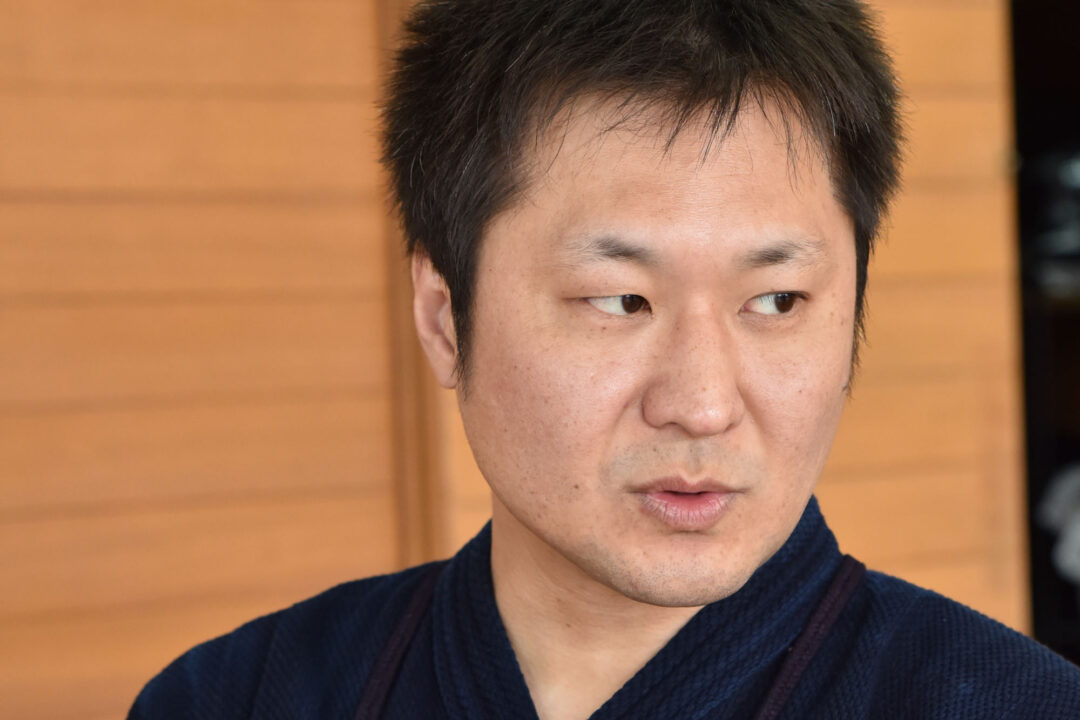 It was his defeat on the big stage, in which the Japanese title is on the line, that triggered him to reevaluate his footwork. “As a result of my training, I was able to broaden the scope of my Kendo” says Kiwada. We asked him about the close connection between footwork and valid strikes that he experienced.

Born in 1978 in Mie Prefecture. He went on to study at Mie High School and then Chuo University. After graduation, he joined the Osaka Prefectural Police.

He was at the frontier of Kendo as a competitor, winning the 60th All Japan Kendo Championship, the World Kendo Championship as a team, and the National Police Championship both individually and as a team. Currently, he is a senior kendo instructor for the Osaka Prefectural Police and teaches kendo to police officers at the Kishiwada Police Station.
“It was at the world championships in Italy, where I represented Japan, that I decided to review my footwork. In the final match against South Korea, we were ahead 2-0 when I had to fight in a very important Fukusho match, but I could not protect our score and lost by two Ippon. When I saw Takanabe Susumu, our captain who took over, calmly performing Kendo using his footwork in a favorable situation, I realized the importance and necessity of footwork.

After that, I set my sights on winning the All Japan Championship that year, and worked on improving my footwork. Even though I only had half a year, looking back now, I feel that it was a very meaningful time for me.

The first thing I worked on over the next six months was how to defend a single Ippon. At the time, I was old enough to be the Fukusho or Taisho for police tournaments, so I decided to study defense first in case a situation similar to the one in Korea might occur.

In reflection, I think I rarely used my legs to defend against my opponent’s techniques. I tried to defend myself with my Shinai, or use my upper body. What I felt after the WKC in Korea was that if I raised my hand and blocked the attack with my Shinai for example, my opponent would not get an Ippon, but I would also lose the opportunity to attack. In addition, some opponents get carried away and start to use more and more techniques, and because my hands are up, it may result in an Ippon even if the striking force is weaker than usual. With this in mind, I came to think that it is important to keep my hands in place and still defend against the opponent’s attacks, so I began to think more deeply about using footwork.

At first, I tried to adopt the movements of teachers and players who were said to have good footwork, but that did not work and I spent my days trying to find my own way of using my feet. In the midst of all this, I arrived at the so-called jumping footwork.

However, if you do this in Kendo, you will not be able to attack at all while floating in the air, and you may be targeted the moment you land. What I have practiced is to apply Seme with fine footwork during offense, and to jump and move back when cutting off the distance. Repeatedly doing so would make the opponent think I am jumping forward as well, which was one of my strategies.

After I made this footwork my own, I was able to avoid defending against my opponent’s techniques with my Shinai more and more and make them air swing. At first, I worked on improving my footwork with the aim of defending myself, but once I was able to handle my body to a certain extent, I began to think about how to connect my footwork to striking.

By subscribing to Kendo Jidai International you agree to the general terms and conditions.
Kiwada Daiki
0 Comments
Share