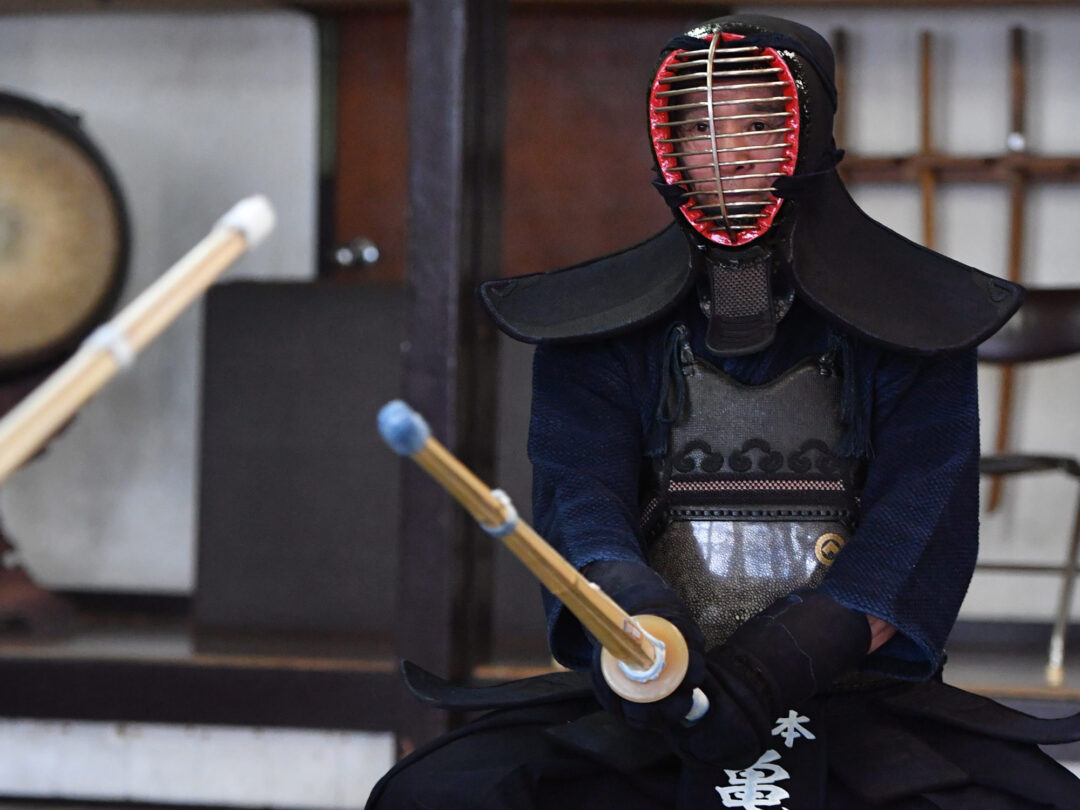 “Striking without repositioning your left foot is the basics of the basics in Kendo” stresses Kamei Sensei. Striking with one beat without preparatory movement is directly linked to the improvement in Kendo. So, what kind of practice should we engage in regularly to implement it?

Ideally, actions in Kendo should be from stillness to movement, so that when you sense a good opportunity to strike, you can follow through with it. I always tell my students that the starting point of Kendo is to master the Men-strike in one motion. If you can strike without any preparatory movement, you can instantly select a technique according to the opponent’s openings.

When the desire to strike is strong, only the right foot is used, and the foot width becomes wide. When that happens, the left foot will not be ready and it will not be possible to perform accurate techniques.

Most of the general kendo enthusiasts do Keiko in a pattern where they start with light Kirikaeshii and move straight on to Jigeiko. It is understandable that they want to enjoy Kendo, since they have to make time for practice in their busy lives. However, Jigeiko, where we test each other’s techniques, is the application based on the foundation of basics.

As we age, our legs deteriorate. In Kendo, footwork is like the roots supporting a tree. If your footwork is bad, you will not be able to advance your Maai to your opponent, and your strikes will rely on your upper body, which will naturally cause you to disrupt your posture.

When I was in my mid-40s, just before my 8-dan examination, I was assigned to work in the county, and my training environment changed drastically. It became difficult for me to find time to practice, let alone a partner for Keiko. However, I had a big goal: to pass the 8th Dan examination in one attempt. What I did was to use regular floorboards. When I was away from practice for a long time, I began to feel uncomfortable in the soles of my feet. Therefore, even if I could not stand on the floor at the Dojo, I made it my goal to do Suriashi barefoot on the floorboards at home.

My daily training consisted mainly of solo Keiko, and of course I trained to improve my physical strength by running and suspending on bars, but I also went to the Dojo during my lunch break to do basic training such as Suburi and Suri-ashi. Thanks to these efforts, I was able to maintain both my physical strength and technique even though I wore my Bogu less often, and I feel that I was able to get through that period in a solid manner until I was able to get into a good Keiko environment.

In order to make the small amount of practice time fulfilling, we need to be creative outside the Dojo. Most of us were not able to practice satisfactorily due to the Covid-19 virus, but those of you who have trained your feet and legs during this time will be able to start Keiko without any particular discomfort when you resume.

Kendo ability is like stacking thin layers of paper, and the results are barely felt. However, if you continue to do Keiko under a good teacher without going in the wrong direction, I am sure you will see results. In the next section, I will introduce some specific training methods making use of the left foot.

Kamae and Suburi: Take Kamae with awareness of your bodies’ axis, and follow up with your left foot swiftly.

Kamae is the foundation of Kendo. If this is not done well, the subsequent strikes will not be correct nor look good. Even if you have the ideal Kamae when you are standing still in front of a mirror, it is not uncommon for it to fall apart when you face your opponent and start attacking or striking each other. When you feel you should strike, your upper body often leans forward and your knee cavity is bent more than necessary. In such a state, the opponent cannot be pressured.

As a way to make an effective Kamae, I recommend focusing on the upper spine and tailbone. By keeping them straight, the back will naturally lengthen, and you will feel a sense of solidity in your torso. This will help you to keep your left foot straight and the Kensaki alive.

Whenever you practice footwork or Suburi, it is important to take this Kamae and perform it with a sense of gravity.

When you swing, swing firmly, so hard that you can hear the whistling of the Shinai, and follow up with your left foot quickly. However, be careful not to swing too hard or you will put too much tension on the right side of your body.

In Keiko where I teach, we try to learn the “one motion” style of striking Men. This is the basis of correct and beautiful Kendo.

We have to pay special attention to the left foot. If the left ankle and knee cavity are too loose, the Kamae will not be correct and easy to disrupt. If the Kamae gets disrupted, so will  the strike, and you will not be able to land your ideal Ippon.

From Kamae, we apply Seme with the foot in front, and the Shinai is swung up at the same time. If you imagine that you are pushing up the bottom of the Tsuka with your right knee, it will be easier to understand. If this is not done, the body will lean forward and the strike will be disrupted.

From Issoku Itto, strike Men straight without repositioning the left foot. This is the most difficult part, even though it is a basic technique. In the beginning, it is of the utmost importance to keep the left foot still, even if it means striking from a shorter distance.

Debana techniques: The left as the cornerstone of Seme to draw out the opponent

In order to perform a Debana technique, you need to be able to draw out your opponent. In reality, you catch the opponent when he is about to move, but you do not act after he has moved.

The Seme of the feet is to maintain a Kamae that is ready to strike at any time, in other words, the preparation of the left foot is important.

In Debana-kote, when you see an opportunity to apply Seme to your opponent and advance your Maai, your opponent may react to your Seme and come out for Men. If your left foot is not in a position to strike, your strike will not be sharp and you will be late.

There is no need to take a big step as the opponent will come out. In order to swing compactly, small and sharp, you need to swing with the intention of moving from the waist with the left foot as the pivot.

Oji-waza: The left foot to apply Seme, draw out, and strike

Men-kaeshi-do is a technique that is frequently used in Dan examinations, but not many examinees apply Seme to draw out the Men strike, so it is difficult for it to get valued.

In your regular Keiko, you will probably practice Oji-waza repeatedly in Jigeiko, but if you don’t pay attention to the process of executing the technique, it will not lead to a competitive edge. Naturally, the role of the left foot is also important with Oji-waza. It is well known that if you are not ready to strike when you apply Seme, your striking motion will be late.

If the amount of Keiko is insufficient, it is the legs that deteriorate first. A representative example of solo Keiko is Suburi, but I think it is better to pay attention to moving the legs rather than swinging the Shinai, so that you can maintain your ability.

Although the national examinations have resumed, it cannot be said that the Keiko environment has recovered sufficiently yet, so I am carefully doing what I can and working on my limited Keiko. 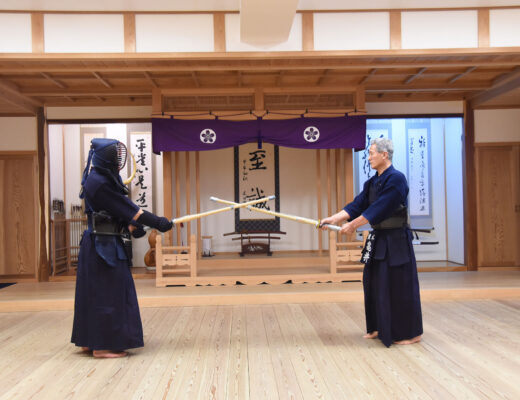 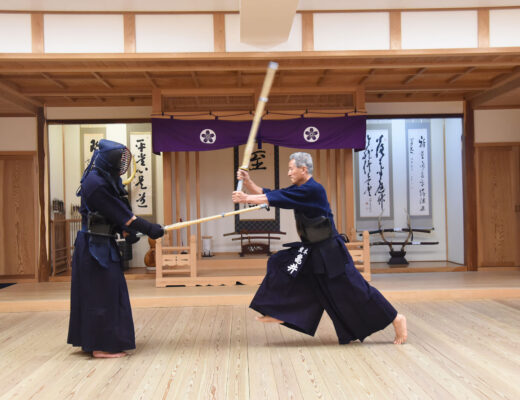 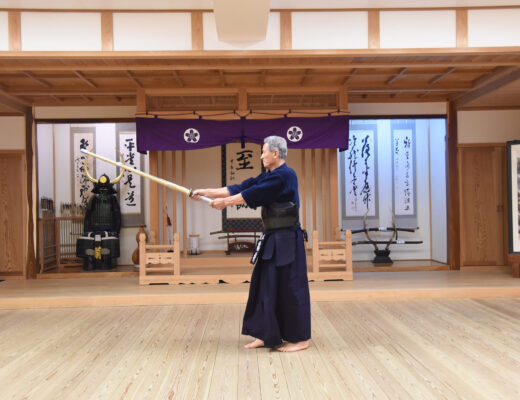