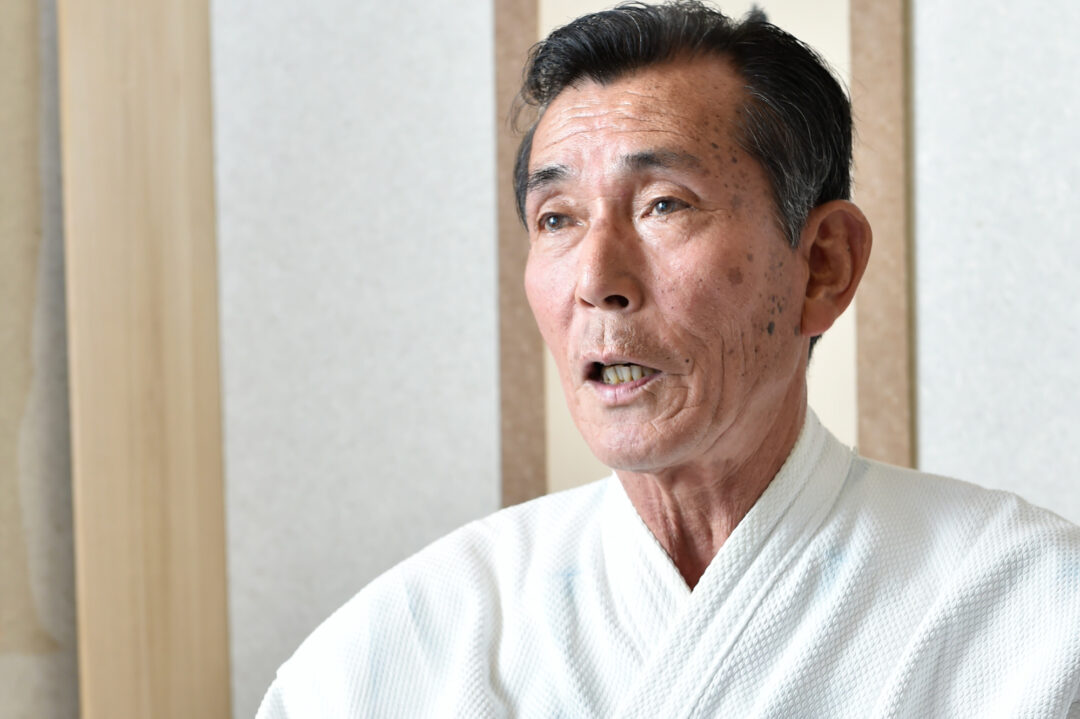 Kendo is the pursuit of astuteness

I am now over 73 years old, and while I feel fortunate to be able to practise due to my strength of body, I am still struggling with the depth of the secrets that I have yet to master. I was granted 7th Dan in the autumn of my 32nd year, and the wonder of the swordsmanship of the great masters of that time is etched into my mind. I am constantly troubled by the comparison between the way they used their techniques and the way I do Keiko nowadays. Even after all this time, the importance of training in “Ji-ri-ichi” (roughly: unification of reality and theory) has become clear to me.

Since I was introduced to Kendo at the age of eight, the year after the revival of Kendo (Kendo was prohibited for a short period of time in post-war Japan), I have continued to follow the teachings of many Sensei for about 24 years until I attained 7th Dan. For 16 years until I was allowed to attain the 8th Dan rank at the age of 48, I practiced with a single thought in mind: “Do not make a mistake on your path!”

I actively participated in several tournaments every year, but due to my position as a teacher, I mostly practised against university students and had very few opportunities to compete against high level Sensei. In any case, I was determined not to do anything that did not conform to the principles of Kendo, and I believed that the way to practice Kendo was to seek to fulfill the principles of mind, sword, and body.

Nowadays, I can no longer ask the Sensei of the past to teach me in person, so I have no choice but to trace my memory or read the few books that remain. However, I am not the only one who is concerned that Kendo today is becoming too competitive and deviating from tradition and the path of self-improvement.

I would be very happy if this article could help those who love Kendo and are working hard for their own training, and those who are aiming for a higher Dan grade.

Kendo is a culture that enriches our lives

Needless to say, Kendo originated in the training of martial arts to survive in battle, and it is not wrong to understand that it was learned and handed down through life and death. Later on, we moved into an era that advocated the existence of values (honor and shame) that went beyond victory and defeat in battle (the way of life and death). In the Edo period (1603-1868), when the rule of the warrior class maintained a sense of calm in the world, Buddhism and Confucianism were combined to create an era in which martial arts training was considered to be more than just martial arts. In other words, the practice of Budo sublimated into a path of cultivation that enhanced one’s courage, deepened one’s sense of virtue, and sought to combine humanity and civility.

It is undeniable that in modern times the perception of Budo has changed. However, even in this day and age, there is no doubt that practising Kendo as a way of cultivating a sense of shame, cultivating boldness, and acquiring a sense of humanity and civility, as well as acquiring martial arts skills, can be the foundation for a high level of education as a member of society.

Whenever someone who has never practiced Kendo before asks you, “Why do you continue to practise Kendo?” and “What is so interesting about wearing sweaty, cramped protective gear and performing strikes and thrusts against an opponent?” It is a good opportunity to ask yourself the same question.

What is it that supports the continuation of Kendo training? I often say, I myself have never had the experience of being motivated by emotions such as “enjoyment” or “fun” in my practice. However, the feeling of exhilaration after practice is something that I always experience, which is incomparable to any other activity. It is thought that the various elements and characteristics of Kendo give an extraordinary stimulus to people’s way of life.