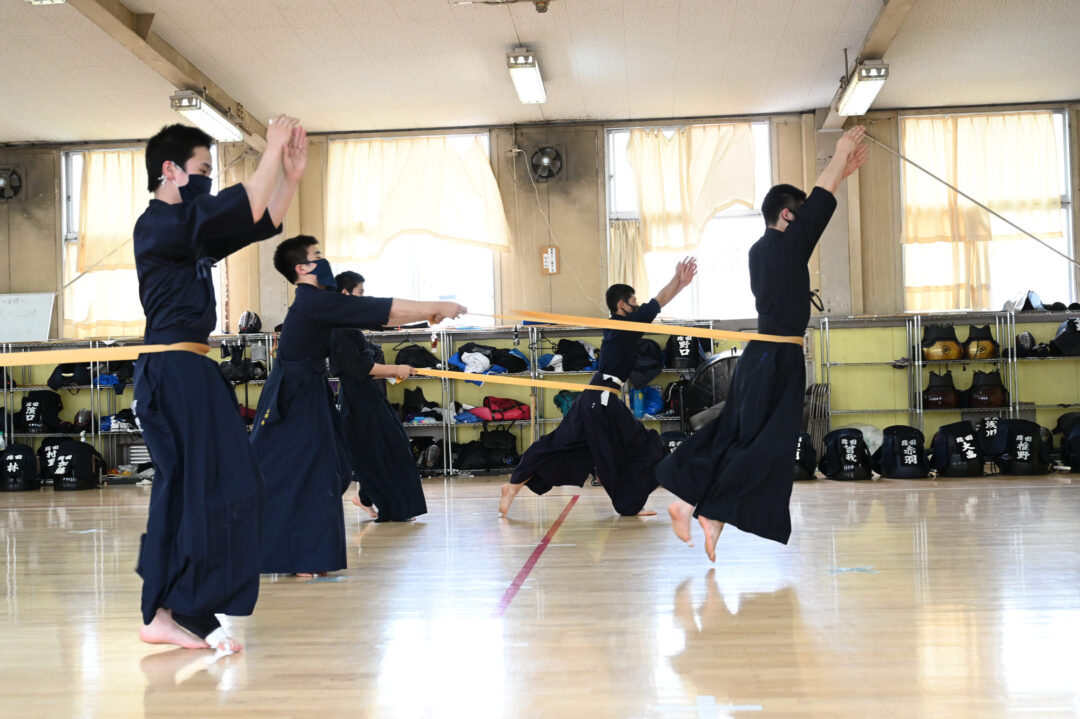 How to perform valid strikes and deny them to your opponent. This is where the timing and body movement, in other words, footwork, come into play. We interviewed Imazato Manabu, a famous instructor at a public high school in Kanagawa Prefecture who has led many schools to national tournaments, about the importance of footwork and practical training.

I think there are many ways to define footwork, whether it refers to the soles of the feet or the action of the thighs and the knee cavities, but I teach it as a form of bodywork.

One of the most important aspects of Kendo is Maai. It is important to move into a position where you can take advantage of your own timing and strike your opponent, in other words, it is important to catch the right moment to strike. In addition, I select and execute techniques according to the opponent’s way of attack, whether to jump in boldly from the spot or step in when just out of reach. On the other hand, it is also important not to let the opponent get into his Uchima (striking distance).

In Shiai, you may hear competitors say, “I was struck because my feet stopped”. To be precise, it means that the feet stopped moving in the opponent’s striking distance. Also, beginners do not understand Maai well and tend to put themselves in dangerous places and get struck. In other words, it is no exaggeration to say that those who control the Maai of a strike will have control in Kendo.

In Kendo, the importance of the feet has long been taught, and from my experience, I believe that proper footwork and bodywork is a function of the brain and nerve system.

I would like to describe my own impression based on books written by experts and other sources. I have heard that different parts of the brain play different roles in different scenarios. For example, the visual cortex processes information that enters the eyes, the auditory cortex processes sound information, and the somatosensory cortex processes information such as touch and pain. In other words, the functions corresponding to the various parts of the human body are located in different parts of the cerebrum. Research has also been conducted to determine the ratio of each part of the body to the surface area of the cerebrum. The fingers and the tongue, which is used to sense taste, occupy a large proportion of the cerebrum’s surface area, while the torso and legs do not. The hands can do delicate work, such as writing, without being conscious of it. By comparison, the legs, hips, and other parts of the body that are responsible for bodily movement are not so sensitive. For this reason, I feel it is important to learn more and practice repetitively with the awareness of opening the circuits of the brain.

The upper body is responsible for Shinai manipulation. The hands and arms are used on a daily basis, so although it takes time to learn, the movement of swinging the Shinai down is not as complicated as it seems. However, the foot movement of sending the Shinai down with Suri-ashi is quite different from everyday movement. Therefore, you should train your footwork and body movements on a regular basis. During Kendo Keiko and Shiai, when you are not in good shape, your body will feel less under control.

When I see this in my students, I tell them to focus on sensing the floor with the soles of their feet. This means to sharpen the nerves associated with the feet and concentrate on Maai.

The nerves are passed through repeated training until the body is able to move accurately according to the condition of the opponent which is captured by the eyes. This is similar to the rehabilitation that stroke victims undergo in order to activate their nerves again. It is also similar to the training of holding chopsticks and eating food with the left hand, which is the opposite of the dominant hand, as some Kendo clubs do. I also teach young people, and those who have been practicing Kendo from an early age have a natural sense of Maai, so the sensation of footwork is ingrained in their bodies. Ideally, the body should be able to move naturally without conscious effort. Because it is a movement that is not usually performed, it cannot be used thoroughly without training.