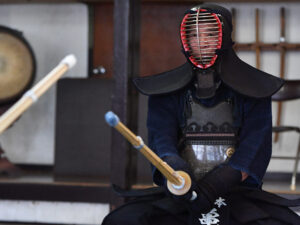 2021.2 KENDOJIDAI “Striking without repositioning your left foot is the basics of the basics in Kendo” stresses Kamei Sensei. Striking with one beat without preparatory movement is directly linked to the improvement in Kendo. So, what kind of practice should we engage in regularly to implement it? Kamei Toru, 8th Dan Hanshi Born in Kumamoto Prefecture in 1954. After graduating from Kyushu Gakuin High School, he went on to study at Meiji University, and then joined the Kumamoto Prefectural Police. During his active career, he placed second in the All Japan Championship, participated in the World Championship, and won the first division of the National Police Tournament. After becoming an instructor, he has won the All Japan Invitational 7th Dan Championship and the All Japan Invitational 8th Dan Championship. He retired as Chief Instructor of Kumamoto Prefectural Police. Currently, he is a permanent director of the All Japan Kendo Federation and chairman of the National Team Strengthening Camp Committee. Ideally, actions in Kendo should be from stillness to movement, so that when you sense a good opportunity to strike, you can follow through with it. I always tell my students that the starting point of Kendo is to master the Men-strike…