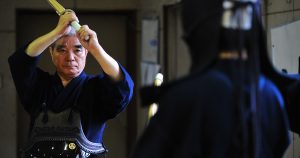 Chiba Masashi is the champion of refined lessons on Kendo, also known as “Chiba magic”. Studying this will bring quick improvement. A Jodan expert reveals his secrets to you in this series. Chiba Masashi, 8th Dan Hanshi Born in Miyagi prefecture in 1944. After graduating from Kogotanourin High School, he was hired by the Metropolitan Police Department. 3 All Japan Championship titles, 2 World team Championship titles, 4 National Police Team Championship titles, 1 National Sports Tournament Title, 1 Meiji village Kendo Championship title. Former occupation; the Metropolitan Police Department honorary teacher Kendo, Hitotsubashi University Instructor. Standard Jodan and standard countermeasures versus Jodan As Jodan is said to be the state of fire, it is all about attacking. The Kamae itself is defenseless as the Kote, Tsuki and Do are open. Your opponent won’t feel fear unless you convince them you don’t care if they do Tsuki. They can try to cut you if they dare, and you will go for the Ai-uchi (simultaneous attack) if they come. In my active career, my teachers trained me by doing Tsuki on me countless times. They sent me flying so often with their Ttsuki. And during that repetition, I was able to…