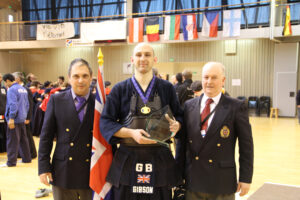 Interview Taken by: Jouke van der Woude (KJI translator, Dutch Team Captain) European Kendo Championship 2014 title Prologue: reflections on tall people and Japan Everybody in Japan always says to me: “You are so tall, we can’t hit you on the head.”So, when I came back to Japan [after the European Kendo Championship in Helsinki, 2009] and everybody was asking how it went and I would tell them “Well, I lost in the quarterfinals to the person that won. But! I fought somebody who was over two meters tall, and I hit their Men twice, so you guys don’t get to complain to me ever again!”So, any time someone tells me I am really tall, I tell them about that one time. Profile Started Kendo in Oct 1999, won the European Kendo Championship in 2014, participated in the WKC five times, and got Kantosho at three of them. Was British Open champion twice and won the Premiers Cup (which is for British only) five times, four of which were consecutive. Moved to Japan in July 2007. Currently works at a global web services company. -What age are you now? Because that’s a long time, Helsinki was 11 years ago, and…