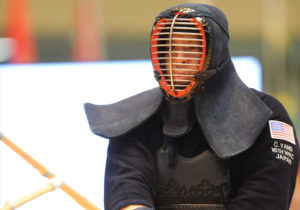 Christopher E.J Yang Christopher Yang was born in Torrance, California (USA) in 1978. Started kendo at Torrance Kendo Dojo in the US at 8 years old. Attended University of Tsukuba in 1998-1999 and joined the Tsukuba Kendo Team. Graduated from UC Berkeley (2000) and Georgetown University Law Center (2003). After graduation, worked at the international law firm of Latham & Watkins, and currently Vice President of Toyota Motor North America and General Counsel of Toyota Connected North America. Represented the USA in the World Kendo Championships from 1997-2015 (7 times), placing Second Place twice (2006 and 2009), Third Place three times (2003, 2012, 2015) in the Team Championships, and Top 8 in the Individual Championships twice (2000 and 2003). Received Fighting Spirit (Kantosho) Award at the World Kendo Championships 7 times. Kendo 7-Dan Kyoshi. I remember vividly the first time I heard my name was listed in a kendo magazine. I made my kendo magazine debut over 25 years ago, when someone submitted an article about the 1994 U.S. Championships to a kendo magazine. Opening the shiny cover of the magazine, I had to flip through 95 percent of the book before finally finding a small blurry photo of my…

Very excited to see your article Yang-sensei!  Congratulations on being asked to contribute to Kendo Jidai - your perspective will be appreciated by foreign kenshi.