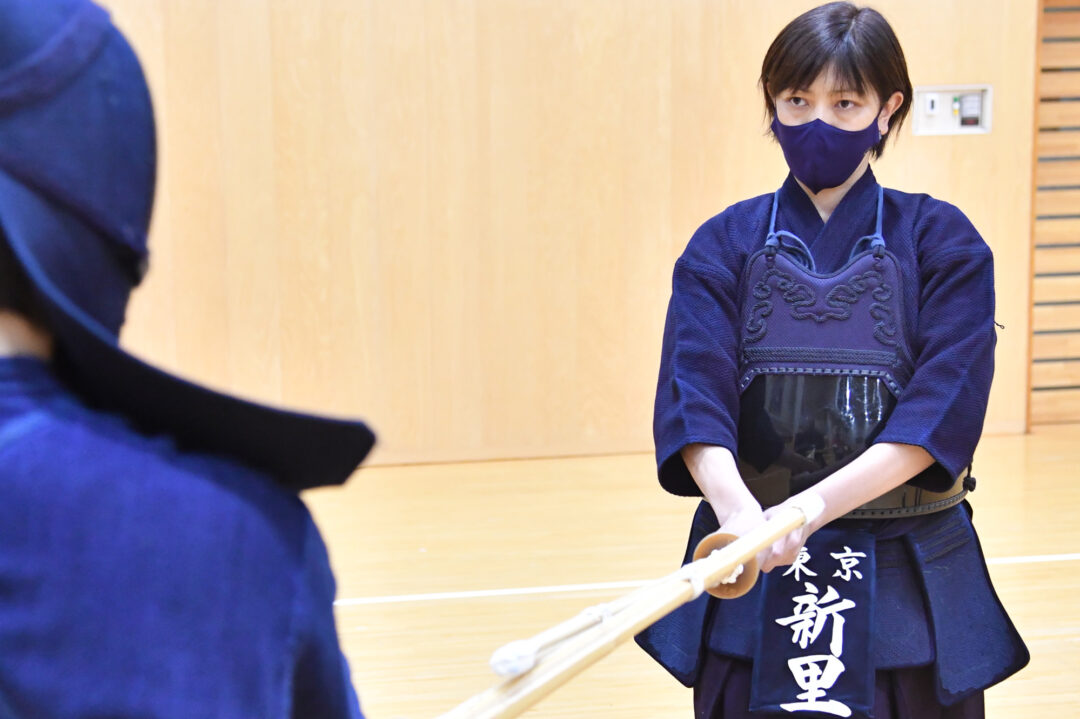 Apply Seme to the center to the very last second, then strike Men while suppressing your opponent

When I was asked by Kendo Jidai to write an article on “Men”, I had a reflection of my own training and Shiai, and at the same time, as I went from being a competitor to an instructor, I was deeply moved by the Men Ippon that my students struck in the past.

I think that Men is the technique that we practise the most in our Keiko, as can be seen in Kirikaeshi and Uchikomi. I myself have learned a lot from my teachers. I have realized the importance of winning through Seme and then striking. However, even when I am able to perform a satisfying Men strike, there is a degree of uncertainty as to how I was able to do it.

Within that setting however, I feel that Men strikes are the best way to express the spirit and determination to confront yourself with the farthest striking target from you, and I think that continuing to dare to challenge that point will lead to striking with abandon, and I am working with this in mind.

It may be presumptuous for a young person like me to be interviewed about Men, the core of Kendo, but I would like to summarize what I have learned so far, what I am aware of in competitive scenarios and what I am currently teaching my students. I would like to thank you from the bottom of my heart for this opportunity to learn.

Born in Okinawa in 1982, 38 years old. After graduating from Konan High School, she worked as an assistant in the Kendo Research Office at Nippon Sport Science University, and then went on to the graduate school of the same university, At the same time, she was also working for the Niigata Prefecture Sports Association. After graduation, she became a faculty member at the university.
Her accomplishments include second and third place in the All Japan Women’s Championships, third place and best eight in the World Kendo Championships, second place in the National Athletic Meet, first place in the All Japan Inter-Prefectural Women’s Tournament and second place in the National Teachers’ Tournament. Her coaching achievements include winning the All Japan Women’s Student Championship both in team and individual categories. Currently, she is an assistant professor at the Department of Martial Arts Education, Faculty of Sport and Culture, Nippon Sport Science University.

At the beginning of Keiko, I do Soburi. First, I swing up in the manner of Joge-suburi, then swing the Kensaki down to slightly below the knee. At this time, I place my left fist in front of my lower abdomen. I use the shoulder, elbow and wrist joints in a large, soft manner, and move the Shinai by drawing a large circular motion with the Kensaki. The Shinai should be held from above, not from the side. The power of the hand holding the shinai should be equal on both sides. I make sure that my hands do not change position when holding the Shinai.

Swing up straight so that the base of the left thumb passes over the midline of the body, and swing down straight while extending both arms forward. If you put too much pressure on your right hand, the Shinai will meander, so I am careful not to overdo it. The basic principle is to swing the Shinai straight up and straight down to master the blade angle.

Left foot, hip and hand
Working the left side of the body and relaxing the upper body

The director of our Kendo Club, Shizawa Kunio, taught me when I was a student that there is a series of steps before and after striking, such as Kamae, Seme, seizing the moment, striking, and showing Zanshin. I have learned about each of them, devised my own ideas, and refined my own feel for them through experience.

In terms of Kamae, I believe that working the left side of the body (left leg, hip, and hand) is important. For the left leg in particular, I try to keep a proper amount of tension in the knee cavity, neither too loose nor too tight.

I used to have an overly tense knee cavity, which resulted in a cramped Kamae with a strained chest and little leeway. In addition, when I would get into mutual Seme, my knee cavity would loosen too much and my head would lower, causing me to look up at my opponent.

It is very difficult to keep the proper amount of tension in your knee cavity while maintaining a Kamae that allows you to suppress your opponent without getting disrupted. I do not open my left hip outward, but face my opponent with my navel facing upward. I keep my left hand slightly below the navel at one fist’s length from my body with relaxed shoulders.

The key to this part of relaxing your shoulders is to raise your shoulders once, relax your shoulders while exhaling, and then drop your shoulders further. By doing so, the left hand will be placed where it should be. I was able to feel the power in my lower body and a state of relaxation in my upper body again. I believe this will give you a lot of leeway, which will lead to a solid posture that will enable you to suppress your opponent.

Swing straight up and straight down. Use the shoulder, elbow, and wrist joints in a large, flexible manner and swing down in a forward direction.

The action of the left side of the body (left leg, hip and hand) is important. The left leg in particular should have a proper amount of tension in the knee cavity, neither too much nor too little. The left hand should be slightly below the navel with relaxed shoulders and one fist’s length in front of the body.

Enriching your spirit: Suppressing through spirit and releasing

In addition to taking proper Kamae, I enrich my spirit, suppress my opponent as if putting my weight on top of their Shinai, and release the spirit from my Kensaki toward the opponent. I make sure my mind moves in that manner. I believe that by consciously creating an unshakeable Kamae in which the body posture and the Kigamae (Kamae of spirit) are unified, an unrelenting Seme will become inherent.

The charm and most difficult part of Kendo is to win the exchange of Seme from Toma to Issoku-itto-no-maai and secure an opening to strike. In Keiko, when I practise with my teachers, even though I try hard to apply Seme and disrupt them, I cannot. If I try to be patient, I will get struck, and if I try to take the initiative, I will be countered.

I have had many experiences of using techniques in desperation. Also, when I am applying Seme and there is no response, I whimsically perform techniques. Even if the strike is successful, I am instructed that such a one-way technique is a bad opportunity. This is because the Kamae and Seme as mentioned above are insufficient.

Alternatively, I can catch the Debana timing of the opponent’s attempt to move in response to my Seme. By repeatedly performing and studying these types of strikes, I learn the difference between a good opportunity and a bad opportunity by body memory.

Concentrate as much as possible on Ippon, sharpen your senses, and strike with abandon when the moment is right. Maintain your breathing, do not allow your opponent a break, connect your spirit, apply Seme and follow through with strikes repeatedly, and refine your spirit. I believe this will lead to learning the opportunities for striking in Jigeiko and improving one’s foundational strength.

When striking Men, I think it is important to push off the floor with the left foot thoroughly and propel the body forward to strike. The Kensaki should be as close as possible to the center of the opponent’s body, swinging up over the opponent’s head as soon as you push off, and swinging down as soon as you perform Fumikomi. I focus on letting the Shinai pass through the shortest possible trajectory.

*Note: Makoto Yagisawa, 8-dan, head of the university’s Kendo club, said, “The most distinctive feature of Shinzato’s Men is that she applies Seme to the opponent’s center until the very last second and then suppresses the opponent while striking.”

After the strike, the second step of the right foot should be taken quickly, as if extending the strike and the left foot should push to accelerate. When swinging up, be careful not to raise the Kensaki up. If the Kensaki is pointing up, the initiating motion will be larger, and the moment where you were going to strike will become the moment where you are struck. In order to achieve this, I have tried to use small amplitude strikes with the same intensity as when using large techniques while keeping a snappy Tenouchi in mind.

Zanshin: Preparing for the next strike

Even if you strike with full force, if you relax after the strike, you will give your opponent an opening. The important thing is to not lose track of your opponent and to keep your attention on him along with your striking momentum. This preparation will give you the Kamae you need to be ready to strike again, or to respond to your opponent’s counterattack. Zanshin leads to the first stance and attack.

In order to produce an Ippon in a competitive setting, it is important to understand what happens before and after the strike. When instructing students in basic training, I tell both Motodachi and Kakarite that they should keep in mind the interaction with the opponent in competitive settings. I teach the following flow of action in detail: Kamae, applying Seme, strike, catching the opportunity, striking, Zanshin.

When you aggressively attack the opponent’s center with a strong will, you catch the Debana timing when the opponent is trying to respond to your Seme.

In conclusion: Aiming for a better Ippon

I have been blessed with the opportunity to receive guidance from many instructors where I work, including Yagisawa Makoto Sensei and Furusawa Nobuaki Sensei, as well as senior alumni at the Nippon Sport Science University. During Keiko with students, it is a difficult task for me to give myself the same sense of tension in the exchanges of Maai and battle of mental endurance that I feel during Keiko with my seniors, but it is my firm believe that if I can find opportunities to strike and perform techniques with abandon, I can attain the ultimate Ippon in Shiai

To this day, Men-uchi is what I have spent the most time and effort on since I started learning Kendo, and it is the center of my Keiko. Striking a better Ippon, is a theme that will never change. Unlike when I was in my teens or twenties, I cannot deny that my physical strength and muscle power have declined. There are still many issues to be solved, such as how to advance my Maai, how to secure my Uchi-ma (striking distance), and how to seize opportunities. In the course of my studies with emphasis on Men strikes, I have learned anew how difficult and deep Kendo is, and I will continue to devote myself to “an Ippon that strikes the heart” in order to get closer to the invisible soul of Kendo that flows within the techniques. 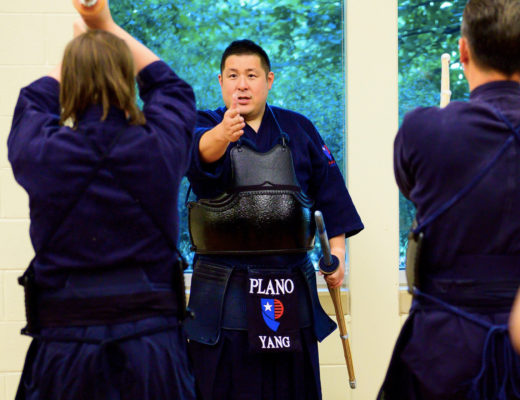 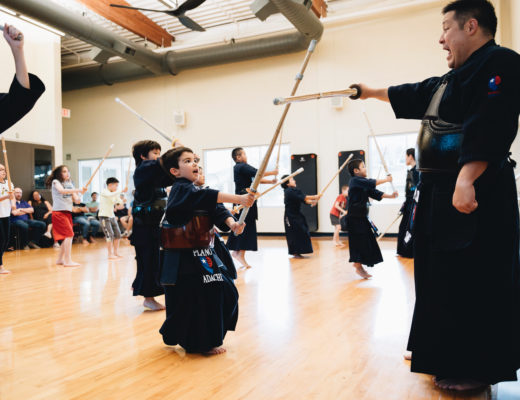 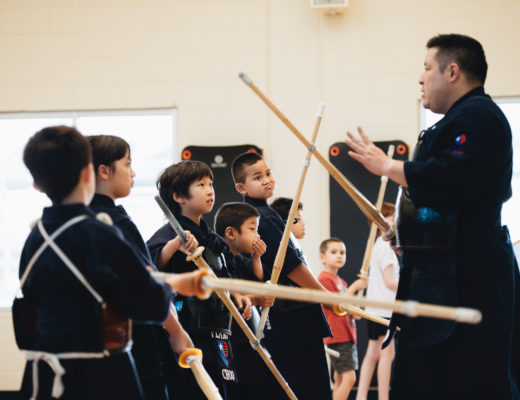