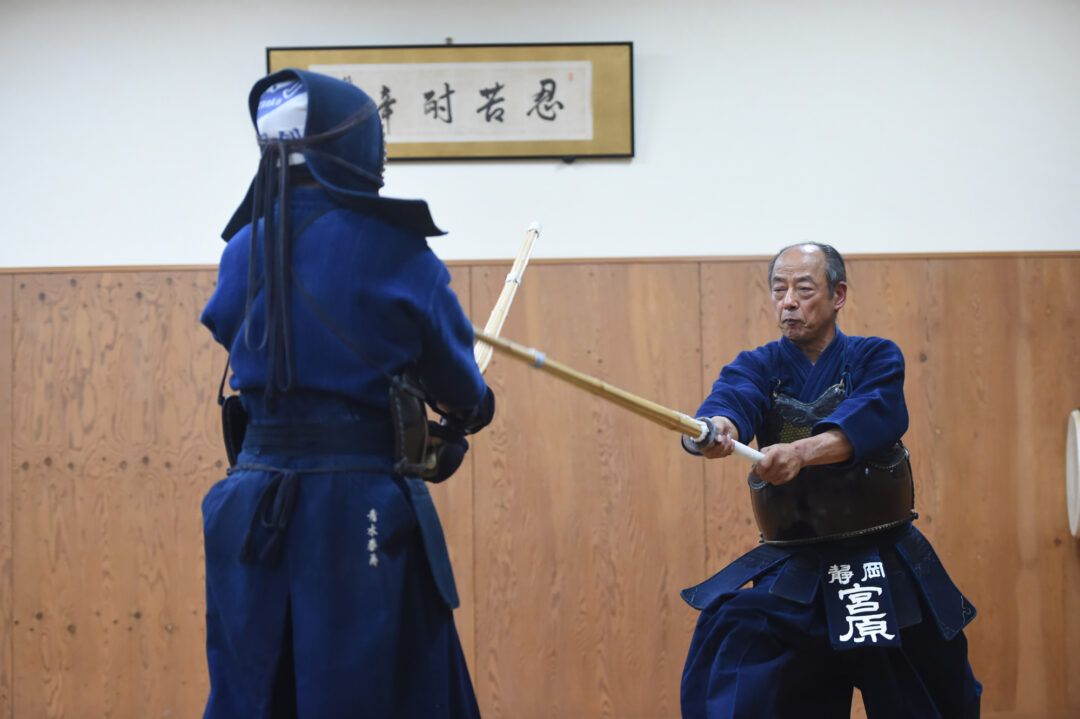 The left foot has been a common topic with Kendo Jidai. A better use of the left foot will lead to Ippon. In this article, Miyahara Shouji will introduce techniques directly related to competitive settings, such as the relationship between the left foot, Kamae, Seme, and striking.

Miyahara Sensei, who instructs many high Dan rank practitioners in his hometown of Shizuoka, recommends not only teaching correct basics but also practising how to catch the early stage when the opponent is about to apply Seme. What kind of practice is needed to accurately catch the opponent’s timing for Debana techniques?

Using the left leg to catch the early stage of Seme

In Kendo, there is a teaching that says, “Don’t strike with your hands, rather strike with your legs, rather yet, strike with your waist.” When you first start learning Kendo, you try to swing the Shinai and try to strike with it. However, that is not done correctly. So, as you get used to it, you learn to use your legs and take advantage of openings to strike your opponent. However, as you improve, you encounter stronger opponents and it becomes difficult to make Ippon. It becomes necessary to use your waist and disrupt the opponent while applying Seme and using techniques to finish him off. In order to strike with the waist, it is important to do Keiko focusing on the importance of the left leg.

The Okuri-ashi after the strike is also important for making valid strikes, not only for the Zanshin but also to deal with the opponent when the strike does not result in an Ippon. If you neglect Okuri-ashi, it will eventually halt your progress.

In Kendo, you have to perform striking motions many times in order to absorb the movements into your body. Whether or not the left foot is working correctly and accurately has a great deal to do with improving your Kendo. Overworking it might hurt your Achilles tendon, and overusing it may result in getting struck.

I think this is the most commonly used Men-technique: “From Chudan, strike the opponent’s Men without repositioning the left foot”. In the case of Debana-men or Ai-men, if the left foot is repositioned before the strike, not only is it hard to perform a valid strike, but the opponent is also more likely to strike you.

Practitioners with fast Men strikes have their left foot in a good position and their center of gravity is properly placed. The width of the feet and the degree to which the heel of the left foot is lifted must be carefully checked to ensure that it is not moving before striking.

In the basic Chudan no Kamae, the position of the left toe should be along the level of the heel of the right foot. However, when trying to strike quickly without repositioning the left foot, there is a tendency to get more comfortable by leaving more space between the left and right foot. Furthermore, there are individual differences so it is always good to confirm the Kamae of your left foot.

Focus on the left leg and master Men strikes with Seme

By subscribing to Kendo Jidai International you agree to the general terms and conditions.
Miyahara Shouji
0 Comments
Share