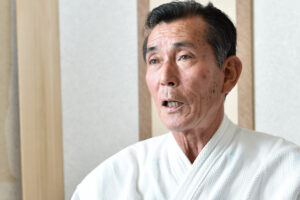 Sumi Masatake, 8th Dan Hanshi Born in Fukuoka Prefecture in 1943. After graduating from Chikushigaoka High School, he moved on to Fukuoka Gakugei University (now Fukuoka University of Education). After graduation, he worked as a high school teacher before returning to his alma mater, Fukuoka University of Education, as an assistant. From 1999 to 2002, he served as a permanent director of the All Japan Kendo Federation. He placed third in the 23rd Meiji-mura Kendo Tournament. He was the ladies’ coach of the Japanese national team at the 11th World Kendo Championships. He is the author of "Training Methods for Kendo by Age," "Kendo is about basics," and "Kendo for personal development". Currently a professor emeritus at Fukuoka University of Education and the head of its Kendo club. Kendo is the pursuit of astuteness I am now over 73 years old, and while I feel fortunate to be able to practise due to my strength of body, I am still struggling with the depth of the secrets that I have yet to master. I was granted 7th Dan in the autumn of my 32nd year, and the wonder of the swordsmanship of the great masters of that time is etched…