The most powerful home training you can do on your own 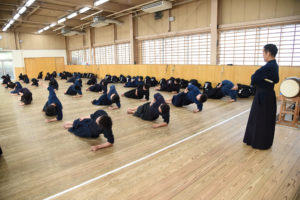 2020.7 KENDOJIDAI In preparation for the upcoming day of resuming training, here are some tips for a workout you can do at home. Professor Takahashi is a leading sports biomechanics expert and long-time All-Japan strength training coach. We asked the professor for a menu that can be started right away and is easy to follow. Let’s try to keep your body mobile with continued training that can be done easily in a confined space and will help prevent injuries when you resume Keiko, making it easier for you to get back to Kendo.  Takahashi Kentaro, 7th Dan Professor at Kanto Gakuin University. Born in Gunma Prefecture in 1972. From Sugamo High School, he moved to Yokohama National University where he got a master's degree. Then he went on to obtain his Ph.D. at Nippon Sport Science University. Since 2006, Takahashi Kentaro has been the physical training coach of the All Japan representative’s training camps. After working at Gunma College of Technology, he became a professor at Kanto Gakuin University where he is head coach of the Kendo club today.  At this point in time, the trend is to avoid training that involves interpersonal training which  includes Kendo Keiko. Therefore, in this…

I don’t know if it’s possible but I would love some more insight about #4(biceps).

Looking at the form in the picture, basic knowledge of levers and anatomy tells you that there will only be load on the biceps from 180 to 120~ degrees before it soon shifts the load to the triceps. That’s ignoring a significant 100~ additional degrees of rotation for the biceps if the arm had otherwise started from the low position at her sides.

If there’s an aspect of sport specificity to this bicep curl, I’d love to learn about it. Perhaps he’s trying to tie in the bicep and the tricep with shoulder isometric stability, and not so much develop biceps strength as one would typically think when doing a “bicep curl”..?