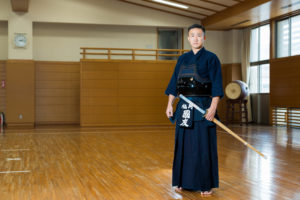 2020.2 KENDOJIDAI Many events led to this victory.Fukuoka Prefectural Police’s Ace, Kunitomo Rentaro finally won his first All-Japan title.He was defeated in two finals before, and soon followed the fierce competition in the training camp to determine the Japanese representatives for the WKC in South Korea.But the Emperor's Cup lay there, ahead of many struggles. Profile Kunitomo Rentaro. Born in Fukuoka City, Fukuoka Prefecture in 1990. Took up the Shinai at Imajuku Shonen Kendo Club. He went to Fukuoka Maizuru Junior and Senior High School and in Kokushikan University he contributed to attaining the title of the All Japan Student Team Championship. After graduating, he joined the Fukuoka Prefectural Police. He has won the All Japan Championship once and came in 2nd twice. He came in 4th in the National Sports Tournament and took the title in the 2nd division of the All Japan Police Tournament. This is the fourth victory for Fukuoka in the All Japan Championship. This year was the birth of his eldest daughter Ichika, and this title made the best gift for her daughter. 5th Dan in Kendo. Feelings of gratitude in OsakaPersistence in conviction of victory In the interview with NHK immediately after the victory he…