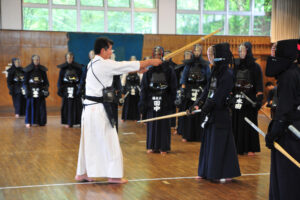 Sumi Masatake, 8th Dan Hanshi Born in Fukuoka Prefecture in 1943. After graduating from Chikushigaoka High School, he moved on to Fukuoka Gakugei University (now Fukuoka University of Education). After graduation, he worked as a high school teacher before returning to his alma mater, Fukuoka University of Education, as an assistant. From 1999 to 2002, he served as a permanent director of the All Japan Kendo Federation. He placed third in the 23rd Meiji-mura Kendo Tournament. He was the ladies’ coach of the Japanese national team at the 11th World Kendo Championships. He is the author of “Training Methods for Kendo by Age,” “Kendo is about basics,” and “Kendo for personal development”. Currently a professor emeritus at Fukuoka University of Education and the head of its Kendo club. Introductory stage, training stage, and mastery stage In the previous articles, we discussed the principles of body, sword, and mind. This time I will reflect on the stages and development in Kendo training. In the old times, there were many ways to describe the stages of training, such as “Shu-ha-ri”. Here, I will refer to them as the introductory stage, training stage, and mastery stage. As a Kendo practitioner, it is important…