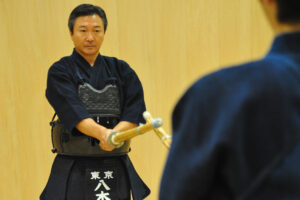 2016.10 KENDOJIDAI Yagisawa Makoto, 8th Dan Kyoshi Born in Akita Prefecture in 1961, 55 years old. Graduated from Akita Commercial High School and went on to study at Nippon Sport Science University. After graduation, he continued his research activities at the university as an assistant. Currently, he is a professor at the Nippon Sport Science University and head of the Kendo club. Kendo is about catching openings Kendo is fundamentally a combative form of exercise, a one-on-one competition of skills. The techniques are based on the interaction with the opponent. It cannot be done based solely on the practitioners movements without an opponent. Furthermore, since the main focus is on offense and defense at close range, the opponent's adjustments determine one's own adjustments, and these changes are extremely complex and diverse in both form and movement, making interaction with the opponent seemingly endless. This is where the difficulty of Kendo lies, as it cannot be solved by simply treating Kendo techniques on an individual level. The All Japan Kendo Federation (hereafter referred to as "AJKF") theoretically organizes the structure of the technical movements, and explains the "technical elements of basic striking" as follows: "From a physical point of view, the striking…