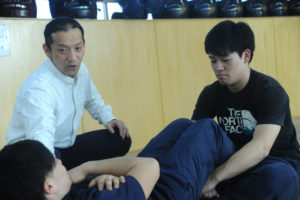 2017.3 KENDOJIDAI Great value can be obtained by performing common training, such as sit-ups, push-ups, and squats if you do them in a short time and with full effort. HIIT (High Intensity Interval Training) has attracted attention as one of the latest scientific training methods that supported the revival of Japanese Judo at the Rio Olympics. Train your core directly to the benefit of your Kendo. Takahashi Kentaro, 7th DanProfessor at Kanto Gakuin University. Born in Gunma Prefecture in 1972. From Sugamo High School, he moved to Yokohama National University where he got a master's degree. Then he went on to obtain his Ph.D. at Nippon Sport Science University. Since 2006, Takahashi Kentaro has been physical training coach of the All Japan representative’s training camps. After working at Gunma College of Technology, he became a professor at Kanto Gakuin University where he is head coach of the Kendo club today. Recently, HIIT has been in the spotlight as one of the training methods that supported the revival of Japanese Judo. But it’s not that complicated, it's just the same excercises you normally do. One of the most famous HIIT workouts is "tabata-style training" invented in Japan. All you have to do…