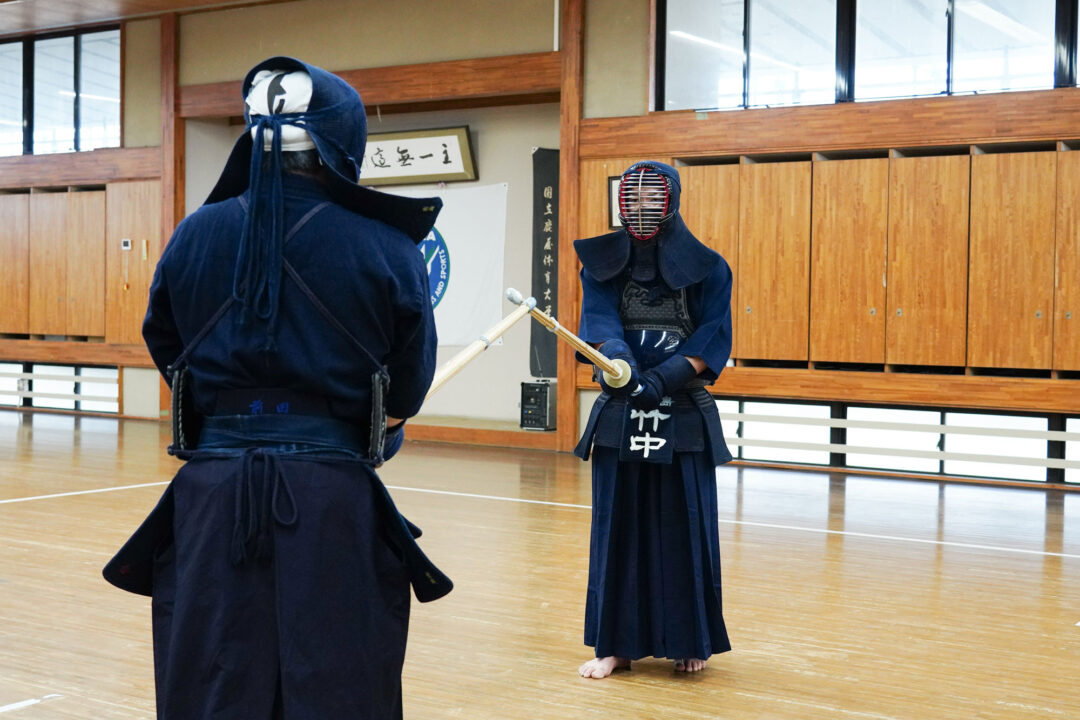 Takenaka Sensei passed his 8th Dan examination in October with flying colors. Based on the principle of striking without repositioning the left foot, he has continued to research and devise new methods of Okuri-ashi (basic Kendo footwork) and Tsugi-ashi (repositioning the left foot). In this article, we will introduce the two different types of footwork that he has been practicing in order to expand the range of his Kendo.

The importance of the left foot has been taught to me since I was a young boy learning Kendo and at my alma mater, PL Gakuen.

The biggest advantage of striking without repositioning the left foot is that you can hit faster than your opponent because you are ready to perform the striking motion. I believe that the accumulation of this experience will lead to confidence in actual competition.

During my six years at PL Gakuen, I learned how to use my left foot and how to put my body weight on it in order to strike in one step from a far distance where the Kensaki cross each other slightly. In Keiko, I was strictly warned if I moved my left foot even a little when I entered the striking motion.

In Kendo, one condition for an effective strike is the unity of the body and spirit, and this requires a balanced movement of the upper body (swinging up and down the Shinai) and the lower body (Fumikomi). I think that the strikes from a far distance made me learn this through body memory rather than theoretically.

The timing of the upper body (swinging up and down) and the lower body (Fumikomi) is the key to Kikentai-ichi, but the timing of performing Fumikomi and the downswing tends to differ depending on the level of skill. In the case of beginners, the Fumikomi tends to be faster than the downswing, but as the skill level increases, this is increasingly vice versa.

In recent years, this has become excessive in young competitors’ Shiai, and there is a significant time gap between the strike and the Fumikomi. This type of striking is still in the developmental stage and needs to be corrected from the standpoint of the original goal of Kendo, which is to strike with correct posture. One of the major factors that need to be corrected is the correct use of the left foot. First of all, I believe that it is most important to learn the technique of striking without repositioning the left foot when entering the striking motion. In order to catch the opponent in the initiation of their movement, the left foot must be in place to strike accurately.

However, in Kendo we fight over Maai, and you have to close the Maai between you and your opponent during mutual Seme in order to get into striking distance. This is where various types of footwork, such as the Okuri-ashi (basic Kendo footwork) and Tsugi-ashi (repositioning the left foot) become necessary. In order to attack your opponent, you must carefully adjust your timing, sometimes using Okuri-ashi and sometimes using Tsugi-ashi. In recent years, I have been trying to use these types of footwork to enter into my Maai, and I feel that this has broadened the scope of my Kendo.

To prepare for the 8th Dan examination, I took videos of the sequence of movement from Seme to striking to Zanshin, and tried to realign my own sense of movement and the actual movement captured on video.

As my regular training partners are university students who move a lot and with great speed, there were many times when I reacted to something and my Kamae got disrupted. There were times when my left foot lingered too long or my feet were too wide, but the use of video was beneficial in clarifying the issues. 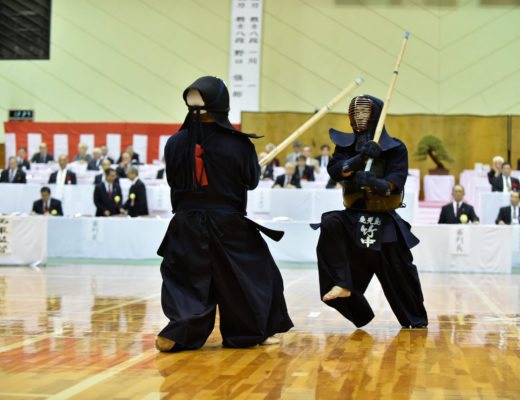 How to hit the perfect kote : Takenaka Kentaro