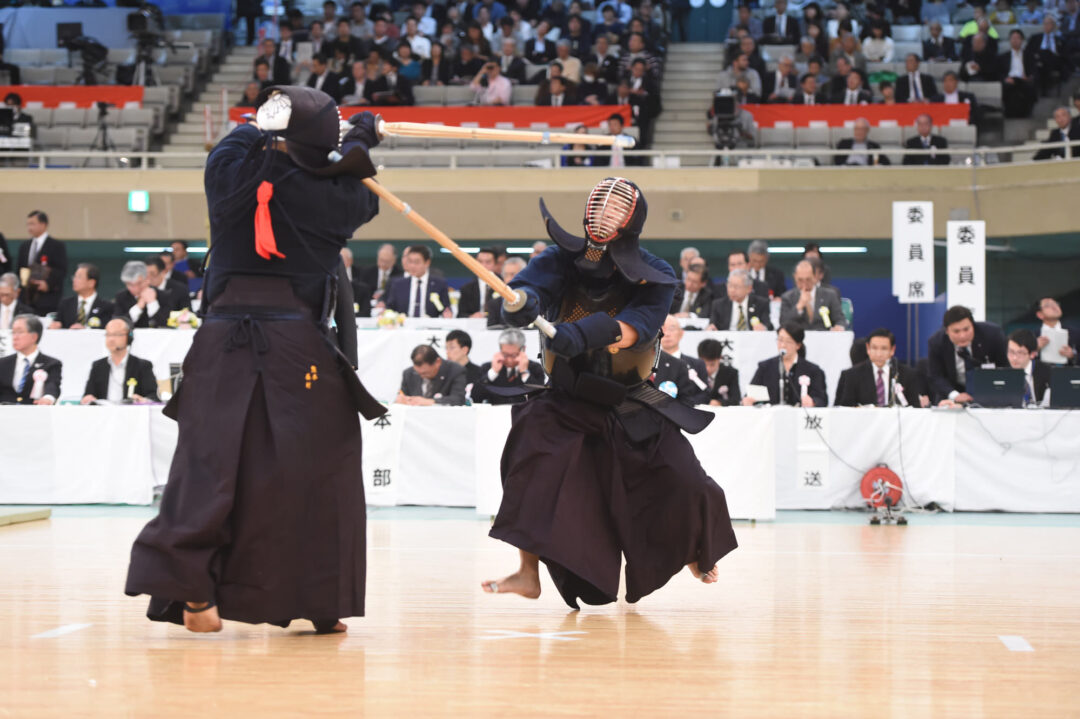 Manipulate the opponent for Kote-techniques

Born in Fukushima Prefecture in 1977. After graduation, he joined the Yamagata Prefectural Police. He has participated in the National Police Kendo Tournament as a team member and took 4th place in the 2nd division, 3rd place in the 3rd division, and participated individually, made it to best 16 at the All Japan Kendo Championship, participated in the All Japan Tozai-Taiko (East VS.West Japan) Kendo Taikai, the All Japan Interprefecture Kendo Championship, and the National Sports Festival. Currently works in the Human Resource Development Division of his Police Department, and is their Tokuren coach.

When I was a young Tokuren member, I had a style in which I moved in while applying Seme before my opponent did, moved my Shinai up and down and sideways, and closed the Maai to my opponent and struck before he defended himself. Furthermore, if he did defend himself, I put my Shinai parallel to the angle of his defending Shinai by quickly turning my wrists to forcefully land a technique.

However, speed and strength will surely decline with age. Therefore, what I am emphasizing now is to strike with the same initiating trajectory, so that the opponent does not know what is coming. In other words, instead of striking regardless of the opponent’s movements, I try to strike by moving the opponent.

With Kote-strikes, I enter with the same trajectory as I would for a Men-strike and change to Kote, and perform a strong Fumikomi as if stepping onto the opponent’s left foot while facing them. After striking, I quickly pull my body in close and collide with the opponent.

The Kote is the lowest of all striking targets, so if you are too eager to strike, your line of sight will also be lowered. If your eyes are down, your upper body will lean forward, disrupting your posture. Furthermore, since the Kote is also the closest target, if you omit the process of Seme and just go for it with speed, the strike will be light. Therefore, the body should move horizontally as if pushing out the core of the body with the back-plate of the Hakama, keeping the line of sight constant and avoiding any disruption of posture, and move straight at the opponent. In addition, to prevent the opponent from performing an Oji-waza or a retaliation strike, I quickly move my body toward the opponent. Even if the technique is not successful, it is important to be ready to perform the next technique without a moment’s delay.

The Kamae must always be ready to strike and respond instantly to the opponent’s movements. The right hand should grip the Shinai from above, tighten the little- and ring-finger for Shikake-waza and the thumb and index-finger for Oji-waza. For the left hand, the little finger is placed halfway across the bottom of the Tsuka, the little- and ring-finger are tightened, and the Shinai is gripped from above. The left hand should be placed slightly left to the centerline of the body, with the Kensaki pointing to the opponent’s left eye. The grip is tight on both the left and right hand because a looser grip increases the width of the grip, which in turn causes a delay in the spur of the moment.

To achieve a valid strike, Seme is indispensable. The Seme is meant to make the opponent lose his physical and mental balance so that he is unable to perform sufficient actions. There are various types of Seme, such as Seme by spirit, Seme by Kensaki, and Seme by striking, but I believe that Seme by footwork is especially important. When I think back on being struck in my own Shiai, there were many instances where my feet stopped moving. As long as your feet don’t stop moving, I don’t think you will be struck, even if your opponent is a bit stronger in terms of ability. Therefore, I think it is necessary to be in a position to strike instantly in any situation.

In order to strike the opponent, it is necessary to vocalize, follow up with the left foot, and tighten and relax the Tenouchi quickly at the same time. This will allow for sharpness of movement.

Seme from above and below

When I am going for Men, I make my opponent aware of Kote, and vice versa. If the techniques are too unbalanced toward one or the other, it is impossible to achieve valid strikes effectively. I believe it is important to manipulate the opponent by always moving in through the same trajectory until just before the attack to draw out a reflexive defense rather than a conscious one.

I teach the Tokuren members of the police and Dojo students (Isshinkan) that the prelude to striking is more important than the striking itself, and that if the prelude is solid, the valid strike will follow. I will continue to value core principles and strive for mutually acknowledged Ippon.