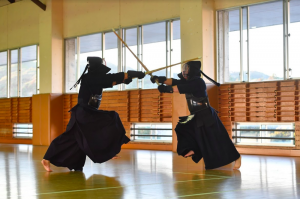 The unified direction of Shinai and body To hit a powerful Ippon while paying attention to the position of the left hand Iwakiri Sensei is currently the men’s and women’s coach of the International Budo Universities’ Kendo Club. He emphasizes the importance of ensuring the correct position of the left hand in order to strike a powerful Ippon and introduces a part of the Uchikomi Keiko he teaches at the International Budo University. Profile Iwakiri Kimiharu, Kyōshi 8th Dan. Born 1966 in Miyazaki prefecture, 51 years old. Moved from Kōchi Highschool to the International Budo University, and became a teacher there upon graduating. Participated in the All Japan East-West Tournament, National Sports Tournament, National Teachers Tournament, and the Inter Prefectural Tournament, a.o. Currently professor and coach of the International Budo Universities’ Kendo Club. I became the coach for my old schools’ men's and women’s team last year. The late Komori Sensei who was the main professor at our school endorsed and taught us kendo by which you pressure your opponent with the foot of Seme, which is the right foot. There is a sequence in Kendo by which you pressure, disrupt your opponent’s posture and perform a strike. That is…

Why can’t I see this content? What level of membership should I have to read this??

Thank you for contacting us!
There was a little error, but it has been fixed and you should be able to read the article now.