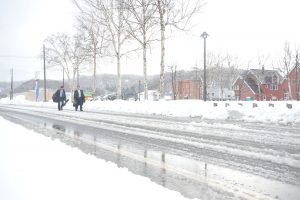 2012.03 They walk the silver world as two people. The remembrance of paths they passed daily once, has changed in appearance with the flow of time, but for the two of them the sight back then, is etched in their minds even now. Eiga Hideyuki and Eiga Naoki. Hokkaido's unique brothers’ path of the sword and final destination… Nostalgic practice interview Towards what lies ahead and remains unseen In early December when heavy snow fell in Hokkaido, the Eiga brothers welcomed me to visit their hometown, Kimobetsu. The older brother, Hideyuki was part of a select few to achieve his 8th dan, the highest rank. The younger brother, Naoki, worked with outstanding ability as director of the Hokkaido police Kendo Tokuren, and as the coach for the Japanese representatives for the 15th world championships held in May 2012. It has been long since the fancy name “Eiga” has been established in the Kendo world. It is over 40 years ago that the elder brother, Hideyuki, swung his Shinai in Kimobetsu, Hokkaido. A few years later, as the younger brother, Naoki, started kendo following his brothers’ footsteps, the names of both who pushed on with sincerity quickly spread in the world…